Drake is trolling Druski after he leaves the rapper out of his homage post.

Druski has been a popular figure online these days with his comedic bits and celebrity associations. Recently, the social media personality took to Instagram to share a photo reel of him and some of those famous faces and his loaded caption incited reactions from rappers like Drake and Lil Yachty.

In the post, which had pictures of stars like OBJ, G Herbo, Jack Harlow, and more, Druski implied that any absentees were also absent from his life. “If you don’t see ’em in the pictures with me, that mean they faded away…,” he wrote. Lil Yachty was among those who took offense writing, “Swear I just faded away.”

Drake also chimed in on the matter scribing, “Wow the fact I’m not in this bullshit ass post,” he commented. Druski’s recent success comes after he made an appearance in Drake’s “Laugh Now, Cry Later” music video. It seems the Toronto rapper was a bit more vexed about the post than his initial comment implied. He went on to rant some more about the slight and even shaded Druski for capping on his celebrity affiliations while he was at it.

“The pic of you and Herbo from the airport pickup location he not even really knowing who u are all the way look at his eyes,” the rapper wrote. “The only thing that needs fading away is your sideburn into your beard,” he added in a separate comment. The hilarious jab garnered thousands of likes and got the attention of the comedian, who later shared screenshots of his Facetime conversations with both Drake and Lil Yachty.

While neither rapper seemed enthused or amused at the very least, Druski wanted fans to know that everything was good between him and them. “N***as want SMOKE behind that last caption,” he wrote alongside the photos. “LOVE YALL BOYS MAN 4LIFERSSSS.”

Do you think Druski overlooked a famed hip-hop music titan like Drake inadvertently or with intent? 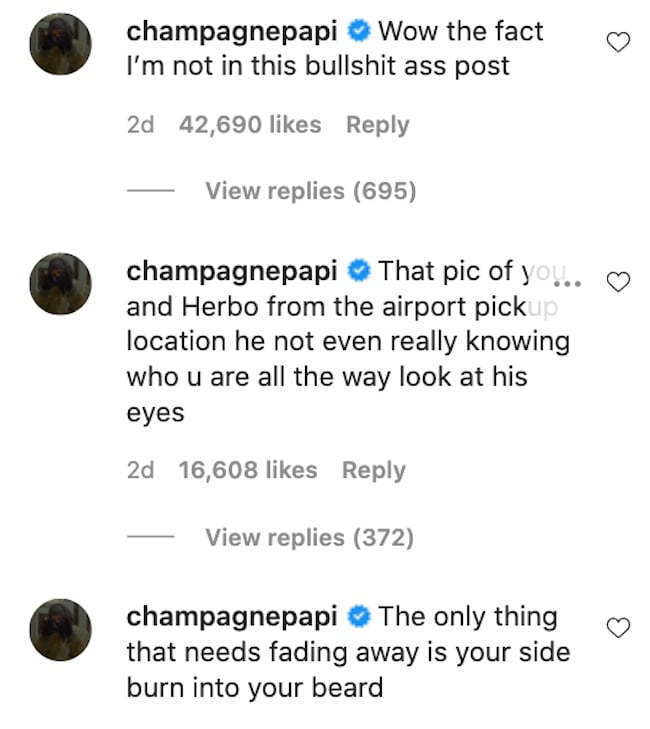